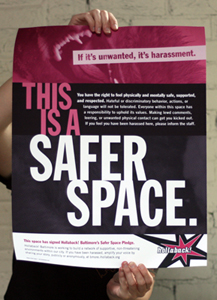 I first learned about Hollaback! Baltimore when local activist and musician Shawna Potter was featured on my favorite podcast, Escape Velocity Radio. And I was excited by the opportunity to design a poster for their Safer Space campaign.

Hollaback! is a nonprofit organization as well as a movement of activists from around the world. Their goal is to end sexual harassment in public places, and their approach is both novel and effective. Using smartphones and social media, victims are empowered to turn the lens back on their harassers, exposing their behavior. Little by little, Hollaback! aims to transform the current street culture—which expects victims to just “put up with” abuse that makes them feel isolated, dehumanized and threatened.

Hollaback! Baltimore is working to create a network of venues city-wide that are taking responsibility for their members’ safety. These “Safer Spaces” have signed a pledge to uphold  a supportive and non-threatening environment.

Together with Shawna and Corey, we created a poster that is both aggressive and authoritative. The threat is visual—a reminder to those who might think that sexual harassment isn’t “a big deal,” or doesn’t impact them. But ultimately, the message of this poster is about empowerment: people and businesses taking proactive steps to make everyone feel safe and welcome.

Designing a logo is a bit like trying to write haiku. It’s…

Two years ago, we began working with the inspiring people at Split…

Just last week, I had the privilege to spend a pleasantly mild…